Due to very good collaboration with Panasonic Electric Works Deutschland GmbH, we have included the Laser Marker systems in our sales program since 2007.

In recent years, the labelling of capital and consumer goods using laser has gained increasing significance and cannot be divorced from production any more. On one hand, the high flexibility of the procedure is more important than ever today, because parts need to be individually marked for reasons of traceability. On the other hand, we have been successful in considerably improving the old problem of difficult operation. Last but not the least, the laser labelling systems have even become more cost effective in recent years.

CO² Laser
SUNX has conceptualised the Laser Marker of the LP-400 Series, especially for industry sectors with particularly high requirements of speed and functionality. These are CO2-Laser marking systems with 10W, 20W and 30W power output, which can label moving objects up to a conveyor belt speed of 240m / min “on-the-fly”, because of the ultrafast Galvanometer scanner (max. 12,000mm/s). In addition to that, it is possible, for example, to synchronise the labelling and feeding speed, because an encoder interface has been implemented.

Fibre laser
The latest Laser Marker-Generation by SUNX is an advancement of the YAG technology, which is called FAYb (Fiber Amplified Ytterbium). These fibre lasers offer some advantages as compared to the conventional Nd: YAG systems like better print quality (laser beam diameter e.g. LP-V10U-C 60?m), smaller casing dimensions, a considerably longer service life of more than 60,000 hours and lower fixed costs, because a FAYb system has considerably reduced power consumption (390VA) and manages with simple air cooling. The LP-V series by SUNX with a power output of 12W (comparable with 50W YAG lasers) is in a position to label almost all metals, using the laser processes of engraving or tempering. Plastics can be marked or even processed by the laser processes of foaming, carbonising (colour change) or bleaching and that too in excellent quality. 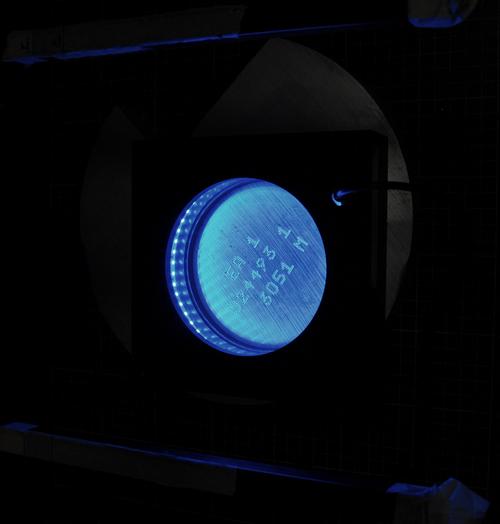